Not all Essential Oils are created equally, so whether you use EO’s for yourself or your animals, you want to be careful of the source you use. Essential Oils...read more

Our bodies (human and animal) were blessed with an innate ability to continually seek an Optimal State of Health and are only limited by the appropriateness of 5 Key...read more

…was diagnosed with Intervertebral Disk Disease (IVDD). ” It’s amazing what those little needles can do!” -Billie Parsons “This was the first time Susie has ever had a procedure...read more 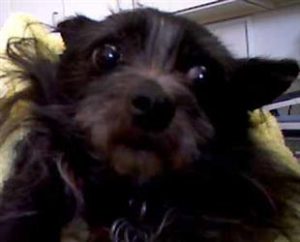 …was diagnosed with polyridiculoneuritis which resulted in an acute, muscle weakness throughout her entire body that prevented her standing or walking.

“…4 months after starting treatments, she took 5 steps. The next day she walked through the kitchen and living room and has been walking ever since.” –Lois Woods

“My dog Mollie lost the use of her legs and could barely raise her head. When we took her to be euthanized, Dr. Nie recommended acupuncture (to normalize help her nerves heal) initially and eventually hydrotherapy (to strengthen her muscles), with no promises of success. She had acupuncture every week initially and eventually every 3 weeks. I worked her joints 1-2 times daily during that interval and used treats to entice to move and exercise her muscles. After about 2 months she had improved enough for me to start the hydrotherapy. For 6 weeks I used hydrotherapy every day to help strengthen her muscles. Just under 4 months after starting treatments, she took 5 steps. The next day she walked through the kitchen and living room and has been walking ever since. Throughout this lengthy ordeal, Dr. Nie was positive and encouraging, which was important since improvements were so gradual and slight. He was also very informative and answered my many questions. Thanks to him, motivation from Mollie and work on my part, my sweet, lovable dog is still a part of our lives.”
-Lois Woods

Some of Our Treatment Options